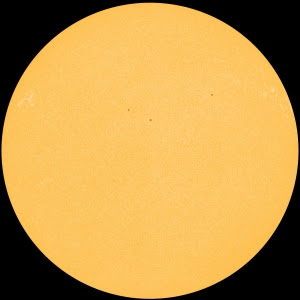 This is the sun on May 12th, 2011. A time that world renowned Solar Scientist Leif Svalgaard has declared Solar Maximum!!!! He has even labelled it on his F10.7 flux and sunspot chart:

Does that sun picture look like solar max. to you? It looks like the typical solar minimum of each 11 year cycle.
What will we call the next 30 years of Solar Slump and Global Cooling? In the tradition of the Maunder and Dalton minima it should be called “The Landscheidt Minimum”. Wait, why not “The Gore Minimum”? Well, we know the answer to that.
Theodor Landscheidt was a scientist that correctly predicted the current lack of sunspot activity in this cycle 24 (at a time when many other scientists predicted more hugely active cycles to come) and he predicted the prospect of much colder times ahead.
Landscheidt’s last paper was also his prediction: “Little Ice Age Instead of Global Warming” and was published one year before his death in 2004. He had calculated a change in the torque on the sun caused by  planets and theorized this changed solar transport in the solar core which was seen in sunspots.
He boldly proposed a Maunder minimum character (much worse than the smaller Dalton minimum) with a deep minimum occurring in the year 2022 and again in 2030. If he is correct, there are going to be much colder times just ahead. Indeed the current sun activity is teetering on a crash to below Dalton levels.
His research and the prediction was completed at a time that global climate computer models were predicting continued global warming for the first decade of the 21st century. A climate change outcome that is proven more absurd every day.
With the sun’s current slump, it’s time for the world to title & declare a new Grand Minimum now, so we can all prepare. Here at Mor Electric Heating we have these solutions:
roof and gutter heat cable protects your house from the huge snowfalls occurring.
pipe heat trace protects your house from the extreme cold that is occurring.
electric comfort heat allows you to keep some target rooms warm to stay in and battle the tremendous heat loss occurring in colder winters.
We wait for the 4th brutal winter in a row and the question is “How much worse will they get?”